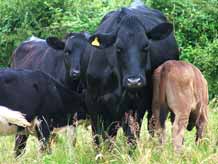 A new report created by the University of Exeter for Devon County Council has highlighted a number of opportunities for the county as part of the examination of the Low Carbon Transition Plan (LCTP).

A collaboration between the Business School and the Centre for Energy and the Environment, based in the College of Engineering, Mathematics and Physical Sciences produced the report.

Dr Daniel Lash and Tony Norton from the Centre and Michael Finus, Professor in the Economics of Climate Change from the Business School were assisted by Jonathan Colmer, a final year undergraduate, in undertaking the analysis.

The report, ‘The Low Carbon Economy in the context of the Devon Economy’ was commissioned by the Council as part of its Local Economic Assessment. It includes an examination of how Devon can meet the targets outlined in the government’s LCTP, which sets out emissions cuts for 2020.
The report also discussed Devon’s specific challenges. For example, transport emissions are more than 25% greater proportionally within Devon when compared to the UK average, and agricultural emissions are proportionally double the UK average.

Despite this, a number of areas of opportunity have emerged. The most significant national policy in the LCTP is associated with reducing emissions from existing domestic dwellings. This could support an additional 800 jobs and generate £500 million for Devon’s economy.

Policies aimed at more efficient use of fertiliser, better management of livestock and manure, advice and financial support to the agriculture sector, encouraging woodland creation, reducing landfill and uptake of anaerobic digestion could mean that Devon also has the opportunity to lead the way nationally in reducing agricultural emissions.

Large scale renewable energy will have an increasing role to play in Devon, with its wealth of natural resources, for example for wind and marine technology. There may be chances for the port towns in North Devon to support this, and also for manufacturing firms to become component suppliers to this growth sector. Over time Devon could become an area of national skill and expertise in marine technologies, bringing employment and fresh talent to the county.

Michael Finus from the University of Exeter Business School and co-author of the report comments ‘Devon is well placed to move towards a low carbon economy. It has good resources and a proven track record in renewable energy, centres of world leading research at the University and Met Office, strong organic food and tourism sectors and a robust local, grass roots community movement. As this moves up the national agenda, I’m sure Devon will benefit in terms of investment, training and jobs.’

Dan Lash from the Centre for Energy and the Environment at the University and co-author of the report comments “This work forms part of Devon County Council’s Local Economic Assessment.  Together with previous work undertaken by the Centre on transport, and on the domestic sector by the Energy Savings Trust, this evidence base will now be used to identify where the council can adopt recommendations in the existing national carbon reduction policy, and also where it needs to develop new polices to help Devon’s transition to a Low Carbon Economy”.

A copy of the full report is available.