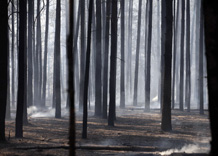 The 'compost bomb' could be linked to peatland forest fires

Two recent studies published by the Mathematics Research Institute at the University of Exeter highlight the risk that this ‘compost bomb’ instability could pose, and calculate the conditions under which it could occur.

The same Exeter team is now exploring a possible link between the theories described in the studies and last summer’s devastating peatland fires in Russia.

The first paper is published in the European Journal of Soil Science and the second in Proceedings of the Royal Society A.

The first paper by Catherine Luke and Professor Peter Cox describes the basic phenomenon. When soil microbes decompose organic matter they release heat – this is why compost heaps are often warmer than the air around them.

The compost bomb instability is a runaway feedback that occurs when the heat is generated by microbes more quickly than it can escape to the atmosphere. This in turn requires that the active decomposing soil layer is thermally-insulated from the atmosphere.

Catherine Luke explains: “The compost bomb instability is most likely to occur in drying organic soils covered by an insulating lichen or moss layer”.

The second paper led by Dr Sebastian Wieczorek and Professor Peter Ashwin, also of the University of Exeter, proves there is a dangerous rate of global warming beyond which the compost bomb instability occurs.

This is in contrast to the general belief that tipping points correspond to dangerous levels of global warming.

The Exeter team is now modelling the potential impact of the compost bomb instability on future climate change, including the potential link to the Russian peatland fires. It is also working to identify other rate-dependent tipping points.