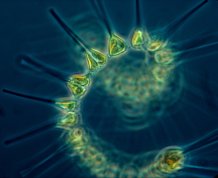 The extent to which climate change impacts the vital marine food web - which feeds the already pressured global fisheries – is revealed through a new, innovative study.

An international research team, which includes Professor Peter Cox from the University of Exeter, has identified a pioneering technique to determine the degree to which global warming affects the ocean’s main source of food over the course of this century.

The research, published in Nature Climate Change, suggests this biological production will show a huge reduction under global warming. As lead author Lester Kwiatkowski, of the Institut Pierre-Simon Laplace in France, explains: “Using our approach we estimate that under a business-as-usual emissions scenario there will be approximately an 11% decline in tropical marine primary production and a 6% decline in global marine primary production by 2100”.

The team of scientists believes that unless strong action is taken to limit climate change, there is likely to be a serious impact on already pressured global fisheries in the coming decades.

Professor Cox, a world-leading climate scientist from Exeter’s Mathematics department said: “we estimate that tropical primary production will decline by 3% for each degree centigrade that the tropical ocean warms“.

Previous studies have shown that amount of marine plankton fluctuates significantly as a direct response of the El Nino phenomenon – indicating that climate change will weaken the biological production of tropical oceans in the coming decades.

Marine primary production by phytoplankton – microscopic plant-like organisms that rely on photosynthesis to reproduce and grow - provides the main source of food and energy to the marine food web, and influences the concentration of atmospheric CO2.

Projections of how this vital source of energy and food will respond to climate change are currently highly uncertain – some models indicate that climate change may boost primary production, whereas others project declines of up to 20% by 2100.

Models that are highly sensitive to interannual climate variability are also highly sensitive to long-term climate change. By using this relationship in combination with satellite-based observations of the historical interannual sensitivity of primary production, the authors were able to constrain projections of the long-term climate impact on primary production.

Study co-author Laurent Bopp added, “This work substantially increases our confidence in model projections. Without strong action to reduce emissions of greenhouse gases, climate change will almost certainly result in a long-term decrease in ocean phytoplankton. This is likely to have negative consequences for already pressured global fisheries.”