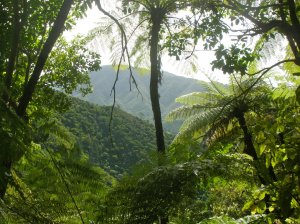 During the super warm early Eocene, temperate forests such as this one in modern day New Zealand may have covered large parts of Antarctica

Paleoclimate, paleoceanography and the role of orbital-forcing during the Cretaceous–Paleogene

Unravelling how climate, the carbon-cycle and the oceans interacted in warm climates of Earth’s deep past is paramount if we are to better understand both the modern and future carbon-cycle-climate system, particularly in the context of ongoing anthropogenic burning of fossil fuels.

Constraining the long-term paleoclimate and carbon-cycle dynamics of the ancient ‘greenhouse’ worlds of the Cretaceous and Early Paleogene (~145 to 34 million years ago), offers us the chance to explore a possible analogue for a much warmer future Earth. This enigmatic time period witnessed great changes in global climate, from the peak warmth of the mid Cretaceous ‘super-greenhouse’, to the cooler late Cretaceous and Paleocene, and on to the Early Eocene Climatic Optimum, where average temperatures in the Arctic may have surpassed a balmy 25°C and temperate forests blanketed Antarctica.

This period was also characterised by a dynamic carbon-cycle, with large volcanic provinces spewing out CO2 and other gasses, vast quantities of carbon-containing permafrost locked up in the ice-free poles, and unstable methane hydrates lurking in the warm oceans. Earth’s biota also experienced several shocks during this interval, from the mass extinction at the K-Pg boundary ~65 million years ago, which saw the end of the age of the dinosaurs, to the large-scale extinction of deep-sea-dwelling microfossils and the radiation of land mammals during the climatic upheaval of the Paleocene Eocene Thermal Maximum (PETM, ~55 million years ago).

The Cretaceous-Paleogene group, led by Dr Kate Littler, seeks to better understand this mysterious time period. We address key questions regarding the role of ocean circulation in regulating and responding to climate and carbon-cycle perturbations, and how these coupled systems were influenced by cyclic orbital forcing. We apply cutting-edge geochemical (stable-isotopes, radiogenic-isotopes, organic biomarkers, trace-elements), and paleontological (benthic and planktic foraminifera) techniques to deep-sea sedimentary cores recovered by the International Ocean Discovery Program and its predecessors.